yes, Chennai Comrades had shown us how to fight against the atrocious and anti-employees attitude of the G.M. (Finance), Postal Accounts Chennai. This fight was going on since long long months ago. After a long struggle, Chennai Comrades achieved their target. On this issue, the role of the General Secretary, Com. T. Satyanarayana and President, Com. Santosh Kumar was so active that all of our units will be inspired to fight against the anti-employees and undemocratic policy which the department as well as Central Govt. wants to introduce in our Postal Accounts department. It is needless to say that our office administration was also same mood as Chennai office to introduce DOP's order (salary through Bank or Cheque) which was not permitted to  the Central Govt. Rule. Thanks to our members. At that time our members were not agree to make champion the office administration policy. So our Association, West Bengal Circle fought against the rule since two years. After two years struggles, we snatched it. Of course, it was possible for active role of our General Secretary and All India President. Our unit believes that the problem of Chennai and Kolkata were the biggest issues which were solved by the All India leaders. So I, on behalf of our unit, congratulate the General Secretary and President.
On Chennai issue our circle leaders campaigned all the sections and we explained it at the Sit and Demonstration programme which was called by Postal Co-ordination Committee (NFPE) on 27th and 28th May 2015.

Thanks to all members.
S. P. Bhattacharjee,
Circle Secretary
Posted by Unknown at 00:49 2 comments: 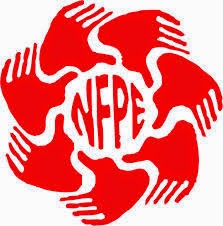